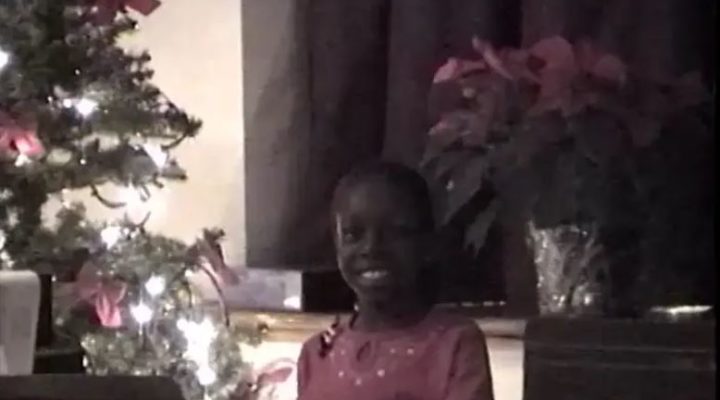 Stella Isaac’s sister films her at her elementary school, École élémentaire catholique du Sacré-Coeur during their annual Christmas concert in 2004 at la Paroisse du Sacré Coeur located at Sherbourne and College. The footage captures a particular experience and community of mostly Black students of Congolese, descent attending the French school, which was located at Sherbourne and Bloor. Now located near Christie Pits, the community and neighborhood is no longer remembered in the same way. On stage during the concert the school’s principal mentions the students’ practice of prayer exemplifying the experience of religiosity at the school.

Education at Sacré-Coeur is rooted in Catholicism and Christianity. Stella recalls a time when students in the class would put their Bibles and crosses on their tables before tests for an extra blessing. This was normal practice. Stella enjoyed attending a Catholic School and has fond memories of the experience, especially when receiving mentorship from particular teachers who pushed their students to prepare for success in their futures. “I have a slight obsession with this time period and this school. Especially as it relates to what is like educating Black students. It was in an environment where I had a teacher that completely pushed us. I never had this ‘you’re not smart enough.’”

The footage also documents images of Stella’s younger brother, Jordan, who has Down Syndrome. She describes him lovingly: “it was nice seeing my little brother making tons of noise and yelling my sister’s name, rubbing my mom’s face.” In relation to Home Made Visible, Stella shares: “It’s great to allow families the opportunity to revisit old footage, explore their history and share that. A lot of people don’t think of Black people in Canada just existing. It’s a great way to change the Canadian narrative.”