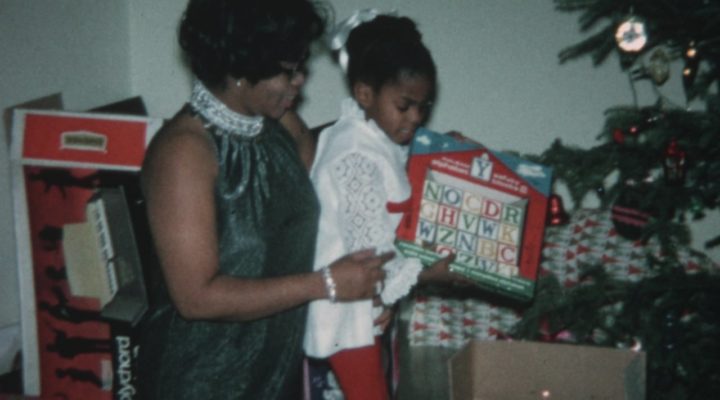 Project and donor(s) contributed description follows: “It’s November 1969 in New York City and the Valcin Family is celebrating Nadine’s dad birthday. Four year old Nadine waves at the camera and helps blow out her father’s candles. We see Nadine’s mother cutting the cake. Later in the day, Nadine, drinking her juice from a cocktail glass, is engrossed in a serious conversation with her father. Her mom, a filmmaker in her own right, is behind the camera shooting on Super 8mm film. Months later the camera is pulled out again to document Christmas, a very exciting time for Nadine was an only child. Her brother and sister, not yet born, were fascinated to see these images of their eldest sister as a child. This private but celebratory occasion is one the whole family dresses up for. Nadine dons an all white pantsuit she later swaps for something more comfortable, while her parents sport equally stylish crisp suits. The clothes become secondary to the gift unraveling- the toy car, doll, keyboard, all slowly collecting around her. Nadine was born in Montreal, Quebec, and these reels capture a short span of her life between the ages of 3 to 5 when the Valcin family relocated to the US. Her father passed in 1999, so the Valcin family was happy to revisit these memories of him.”