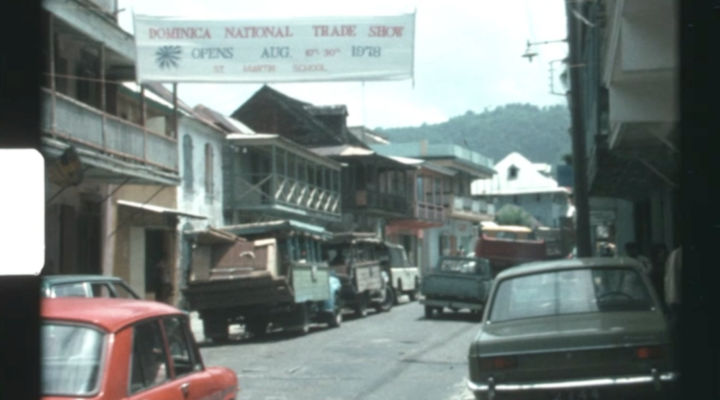 Heather and her siblings met and visited her paternal grandparents for the first time in 1978. “My grandfather was born in 1898. He lived to about 105, so he got to see three centuries – the late 1800’s, the 1900’s and he died in the early 2000’s.” This was the family’s first vacation overseas, a memorable time in the Commonwealth of Dominica where Heather’s parents were born and raised – her father in Vieille Case and her mother in Portsmouth. In the travel clips, various footage shows the time Heather and her family swam at Purple Turtle Beach, enjoyed sugarcane, fresh coconut water and watched her Dad milk a cow on her grandparents’ property in La Haut. There’s also footage of their visit to a busy city. Then back in the countryside, Heather notes, “That’s just us walking with a relative through a village in Dominica” as the relative carries a load of laundry, washed in the river, in a basket on her head. In those days, there was no plumbing or electricity in the rural area where her grandparents lived, so Heather remembers it being pitch-black at night, with only lanterns, candles and the moon to light the way. Using the outhouse there at night was scary for her as a child.

Item consists of a Black-Canadian family’s home movie featuring a plane on the tarmac; children enjoying sugarcane and an adult milking a cow; adults and children drinking from a freshly-picked coconut; children swimming at a beach; cityscapes in parts of Dominica, with streets, buildings and mountains in the background; children playing in a shallow river; a family carrying beach supplies and walking on a path surrounded by a tropical forest.