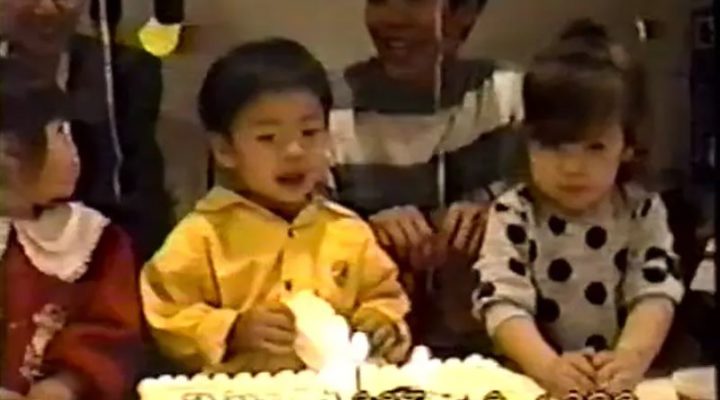 This footage documents a series of four of Derek Kwan’s birthdays in Vancouver in the nineties between October 1991 and 1994.

In October 91, the setting is a Mcdonald’s ball pit in the greater Vancouver area.

Surrounded by friends, family and cousins, Kwan and other kids are wearing the Mcdonald’s card paper hats eating birthday cake, with his mom sitting behind him. At present opening time, seen in the shot is his uncle, cousins, and grandma.

For Derek’s 3rd birthday in October 1992, we are located in Richmond, a suburb 20 minutes away from the city of Vancouver. We are indoors and adults are encouraging Derek to hit a pinata of Mickey Mouse’s head that was made by Derek’s mom, Victoria. She loved to create themed birthday parties, and DIY party favors with her friends, and Derek remembers having a pinata every year, until he got too old for it.

Victoria made the pinata incredibly strong, and it’s very difficult to break. Eventually the adults jump in and start helping the kids break through the Mickey pinata. Derek shares: “Disney holds cache to it as a kid growing up in the 90s as the happiest place on earth.”

Each year, when Derek opens his gift, he consistently receives boxes from the Bay, which he notes is interesting as a staple Canadian store. At his third birthday he also receives a table hockey set, another inherently Canadian gift, and the family excitedly surrounds the set.

At Derek’s fourth birthday in 1993, we are located at Chuck E Cheese. Much like the McDonald’s ball pit, Chuck E Cheese was a go-to sport for 90s kids birthday parties. Derek receives action figures, and a ninja turtle toy.

Documented at Derek’s fifth birthday in 1994, is Derek’s childhood home in East Vancouver, where he lived during elementary and high school. We see the backyard and kids playing surrounding the basketball hoop.

Derek shares that thoughts of being Chinese took a back seat and he didn’t think too deeply about it growing up. East Vancouver was very diverse and being white was the minority. He grew up around Chinese, Vietnamese, Philipino and East Indian people. Although race wasn’t a forefront in Derek’s mind, it was brought to his attention during family functions when everyone spoke Cantonese, and for cultural festivals like Chinese New Year. 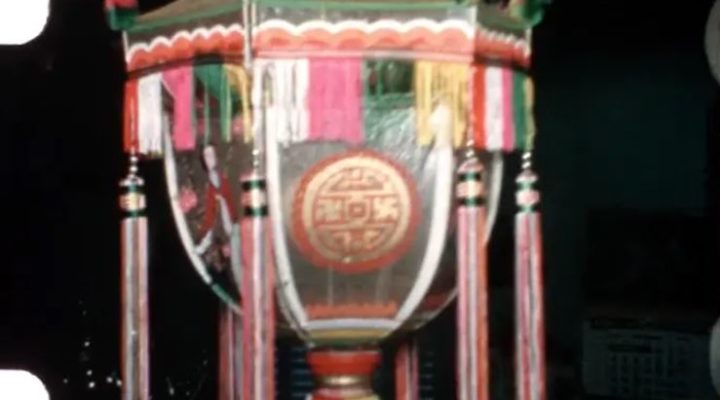 In the 1960s Kate’s dad, George admired the RCMP and made a point of befriending them. This segment includes four RCMP weddings. Here at Virden United Church George, like much of the town, waits to see the bride and groom. George would later go on to screen these films at the town Holiday parties.

The Chan family was the only Chinese family in the community and his relationship with the RCMP helped him maintain his business as the owner of the Virden Café. It also helped that Kate’s mother, Clara, was Russian and hostess at their café.

An RCMP dinner at Virden Café including all of the grooms and brides.

George films the TV and captures Queen Elizabeth’s message to start off the Christmas day.

Kate and her siblings open presents and set the scene for a play her dad directed with typewriter and doctor/nurse kits.  Kate’s mom is in the silk housecoat. Joyce plays piano and they all gather to sing around her,

Mom and Joyce picking up the wrapping and cleanup, etc.

It’s Christmas dinner in 1953, the Chan family sits around the table, Stan, Joyce, Linda and Kate. They are joined by Dad’s first son, Karl Chan, sitting to the right of Kate’s mother, Clara. Karl came to help out in the Virden Café as Virden was in the midst of an oil bloom. Kate’s dad George always remained behind the camera.

George Chan gets Kate and her siblings to act out a play he’s labelled “Fun with Toy” The toy is the mechanical alligator that came directly from China right before Christmas along with customized clothes. They play doctor and nurse with their new presents, the Ben Casey kits.

Stan, plays a mischievous boy who startles the doctor played by Kate. Linda plays the nurse, and Joyce plays the mother of a sick child (the doll). Kate calls it a “play toy within a play of toys.” 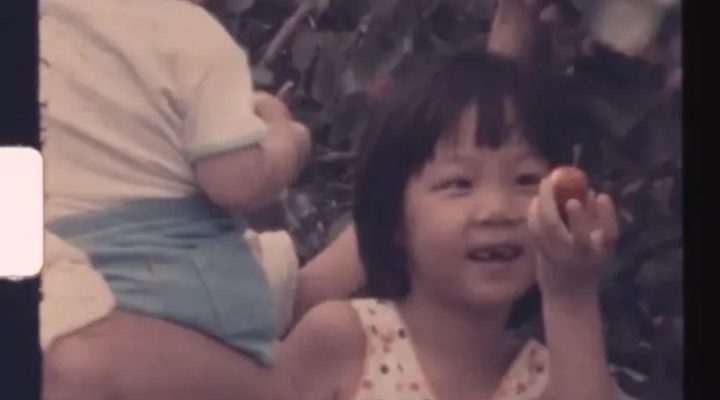 The year is 1981 and the Lo family are spending a summer afternoon picking vegetables and fruits from their backyard. One of the twins, Lorna helps their father harvest cabbage while the other twin, Vivian keeps Aylwin – the youngest and only a year old accompanied on a blanket. Featured through out the clip is the one outdoor activity that remained a family tradition over the year, picking apples from the beloved Crab Apple tree.

Their extended family are visiting from Macau for their first Winter visit. For many of them it was the first time experiencing the Canadian cold. “I remember we were outside playing in the snow for a really long time… the adults were playing in it just as much as the kids”, Lorna recalls. The children can be seen playing on the swing bundled up in coats and snow pants.

During this Christmas, the family have their cousin Sau Fong visiting. The children are waving excitedly to the camera as they open and show their gifts. Over the years, uncles and aunts would occasionally stay with the Lo family while studying English at the local college. Home movies were one of the ways they stayed connected to relatives in Macau and shared their life living in Canada. Copies were routinely made to send back.

Lorna “… remembers filming that specific clip’—the video of the twins giving a home tour of their new home. The camera would routinely come out during gatherings, a feature in the background of their lives, but this was the one home movie Lorna remembers the most. She remembers seeing the house and thinking “A room dedicated for toys, that was unheard of. I thought it was the greatest thing.” Moving into this home marked a new chapter in the Lo’s family history.