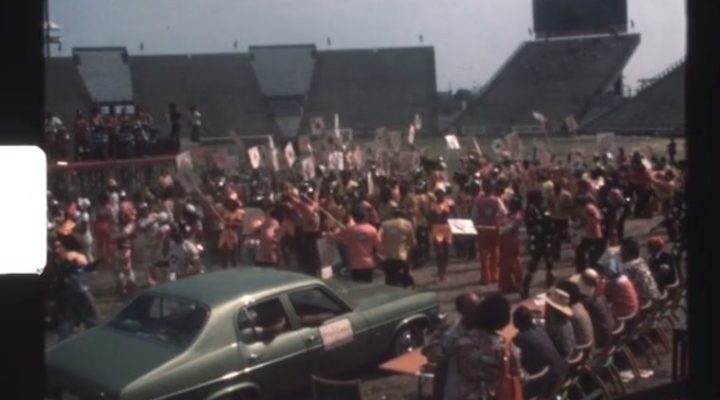 This footage was shot in the mid-1970’s and marks one of the first Montreal Caribbean Carnival celebrations in the city.  Heather’s parents, Richard and Althea Seaman, brought her and her siblings, Hazel and Herbert, to see their first few parades as spectators. In later years, the family was occasionally involved as participants – whether helping to create costumes, build floats or march in the annual parade. The summer event was established to celebrate and showcase the Caribbean culture and heritage of immigrants, who were born on one of the diverse islands of the West Indies or those who had ancestry there.  While Caribbean immigrants in Toronto started their carnival celebration – Caribana – in 1967, to mark Canada’s centennial celebration, Montrealers held their first Carifiesta parade and festival in July 1975.

Item consists of a Black-Canadian family’s home movies featuring crowds and performers at Montreal Carifiesta parade.  Participants in costumes are playing mas, marching with a masquerade band. Several carnival bands – made up of dozens and sometimes hundreds of participants, wearing themed costumes created by various Caribbean designers and assembled by volunteers – would dance and perform for crowds and a group of judges (who would select and later announce the best mas band) at a local stadium, before the masquerade bands would make their way through downtown streets. In the 70’s and 80’s, the Carifiesta parade would mainly make its way along Ste-Catherine Street in Montreal, before the parade was moved to nearby René Lévesque Boulevard in later years.