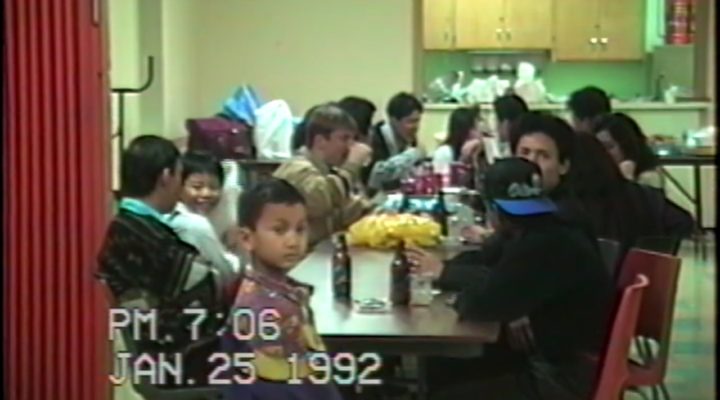 A video clip recording from 1992 consisting of a Khmer-Krom family celebrating a birthday. Project and donor(s) contributed description follows: “The Truong/Tram family’s home movie footage shot in VHS format on January 25th 1992, captures the 1-month old birthday party of their youngest son in Brantford, ON, shortly after moving from Hull, Quebec. A full and lively gathering, their celebration includes families chatting over a community meal, speeches, gift giving, dancing to 80’s music, and loving footage of a peaceful baby enjoying the party. The Truongs/Trams are of Khmer-Krom ethnicity, translating to ‘Khmer of the South’. The Khmer-Krom are an [unrecognised] Indigenous group and ethnic minority in the South of Vietnam. Many Khmer people who inhabited the same refugee camps in Vietnam later immigrated together to Canada. When the Truongs/Trams arrived in Hull, Quebec (now Gatineau, Quebec) in 1989, they were able to regularly connect with a Khmer community at gatherings like these. The Troung/Tram family have since relocated to Toronto ON where they continue to celebrate and take pride in their identity, and attend Khmer language and dance classes. The Khmer Buddhist Temple of Ontario in Hamilton remains central to them and their community. Mother, Trinh Nha Truong, was happy to share her footage with Home Made Visible because she wants to show other Canadians that ‘our people live in Canada too.’”